Join us in person for a conversation with scholar Nicole R. Fleetwood and artist Maria Gaspar followed by an audience Q&A. 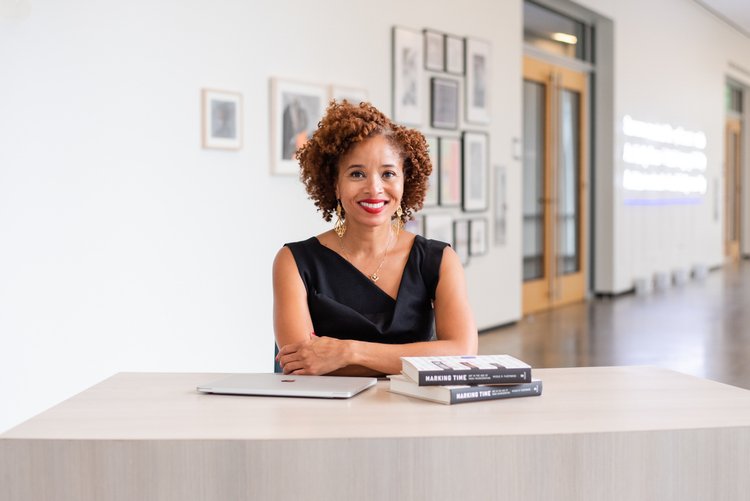 Nicole R. Fleetwood is the inaugural James Weldon Johnson Professor of Media, Culture, and Communication in the Steinhardt School at New York University. A MacArthur Fellow, she is a writer, curator, and art critic whose interests are contemporary Black diasporic art and visual culture, photography studies, art and public practice, performance studies, gender and feminist studies, Black cultural history, creative nonfiction, prison abolition and carceral studies, and poverty studies. Fleetwood is the author of Marking Time: Art in the Age of Mass Incarceration (Harvard University Press, 2020), and the winner of the National Book Critics Award in Criticism, the John Hope Franklin Publication Prize of the American Studies Association, the Susanne M. Glasscock Humanities Book Prize for Interdisciplinary Scholarship, and both the Charles Rufus Morey Book Award in art history and the Frank Jewett Mather Award in art criticism. She is also the curator of the traveling exhibition, Marking Time: Art in the Era of Mass Incarceration, which debuted at MoMA PS1 (September 17, 2020–April 5, 2021). The exhibition was listed as “one of the most important art moments in 2020” by The New York Times and among the best shows of the year by The New Yorker and Hyperallergic.

Fleetwood’s other books are On Racial Icons: Blackness and the Public Imagination (Rutgers University Press, 2015), and Troubling Vision: Performance, Visuality, and Blackness (University of Chicago Press, 2011), which was the recipient of the 2012 Lora Romero First Book Publication Prize of the American Studies Association. Fleetwood is also co-editor of Aperture magazine’s Prison Nation issue, which focuses on photography’s role in documenting mass incarceration. She is a series associate editor of the 10-volume series, Gender: Macmillan Interdisciplinary Handbooks. With Sarah Tobias, she co-edited “The New Status Quo: Essays on Poverty in the United States and Beyond,” a special issue of Feminist Formations (Spring 2021). Fleetwood has co-curated exhibitions and public programs on art and mass incarceration at MoMA PS1, Zimmerli Museum of Art, the National Underground Railroad Freedom Center, Abroms-Engel Institute for the Visual Arts at the University of Alabama at Birmingham, Andrew Freedman Home, Aperture, Cleveland Public Library, Mural Arts Philadelphia, Eastern State Penitentiary Historic Site, and Worth Rises. She is the inaugural Genevieve Young Writing Fellow of the Gordon Parks Foundation.

Nicole R. Fleetwood will be in conversation with Maria Gaspar, associate professor at the School of the Art Institute of Chicago. 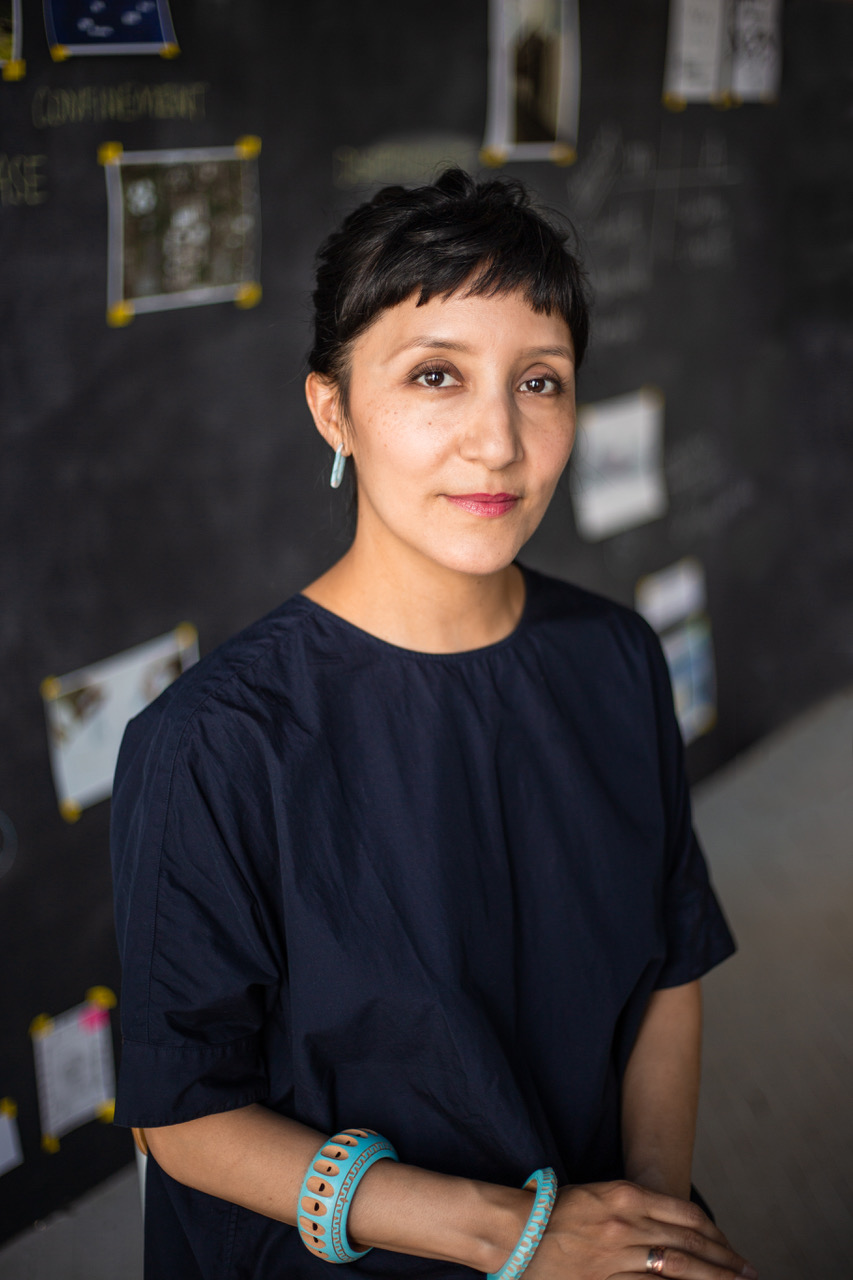 Maria Gaspar is a Chicago-born interdisciplinary artist whose practice addresses issues of spatial justice to amplify, mediate, or divert structures of power through individual and collective gestures. Her body of work responds to the perceptual and political manifestations of place through multi-year projects that span a range of formats and scales. They include sound performances at a military site (Sounds for Liberation; New Haven, CT); long-term public art interventions at the largest jail in the country (96 Acres Project and Radioactive: Stories from Beyond the Wall; Chicago); and audio-video works, documenting a prison demolition located in her childhood neighborhood (Ellipses; Chicago). Working within historically marginalized sites and histories, Gaspar contends with erasure, power, and proximity issues by generating liberatory actions with others. Influenced by the hyper-local, Gaspar challenges understandings of geography and the social constructions of space by mediating and subverting the familiar or unseen to provoke new interpretations.

Gaspar is the recipient of the Guggenheim Fellowship for the Creative Arts, United States Artists Fellowship, Frieze Impact Prize, Joan Mitchell Emerging Artist Grant, Art Matters Award, Imagining Justice Art Grant, Robert Rauschenberg Artist as Activist Fellowship, and Creative Capital Award. Other honors include the Sor Juana Women of Achievement Award in Art and Activism from the National Museum of Mexican Art and the Chamberlain Award for Social Practice from the Headlands Center for the Arts. Gaspar has exhibited extensively at venues including MoMA PS1, New York, NY; the Contemporary Arts Museum, Houston, TX; and the San José Museum of Art, San José, CA. She is an Associate Professor at the School of the Art Institute of Chicago, holds an MFA in Studio Arts from the University of Illinois at Chicago, and a BFA from Pratt Institute in Brooklyn, NY.

Presented in partnership with the Chicago Humanities Festival and the Terra Foundation series on American Art.

What an Abolitionist Exhibition Looks Like in a Carceral World
Catherine Damman | Frieze Magazine | February 11, 2021

The Voices of Marking Time
The MoMA Magazine Podcast | November 16, 2020 | Please note this podcast does not provide transcripts.

Marking Time Website
Marking Time: Art in the Age of Mass Incarceration investigates the impact of the carceral state on American life through the lens of art.

Sustainability as a Form of Resistance in Art
Billy Anania | Hyperallergic | April 18, 2022

Artists call out the injustices immigrants suffer in the US ahead of Independence Day
Gabriella Angeleti | The Art Newspaper | July 3, 2020

Wendy Clarke : with Bruce Jenkins and Maria Gaspar
*This is a library resource that requires ARTIC login

Radioactive: Stories from Beyond the Wall from Maria Gaspar on Vimeo.

Unblinking Eyes, Watching, 2019 Chicago Architecture Biennial
Unblinking Eyes, Watching, is a composite of high resolution images of the north-end wall of Cook County Jail printed at 1:1 scale on a 40' x 26' wall. Located within Gaspar's childhood neighborhood of Little Village, the jail is the nation's largest single-site detention facility and spans 96 acres at the center of the city. Unblinking Eyes, Watching highlights the impact of the carceral institution as a shared backdrop to the daily lives of those living on both sides of its walls. Through making visible the politics of location, Gaspar poses questions about how the language of detention, surveillance, and policing marks our contemporary urban experience.

Art for Justice Grantee (2018)
Through her Art for Justice grant, Maria Gasper created a TV miniseries called Walls Turned Sideways are Bridges, produced and recorded inside Cook County Jail and staged inside a division where a former cell tier has been turned into a classroom.